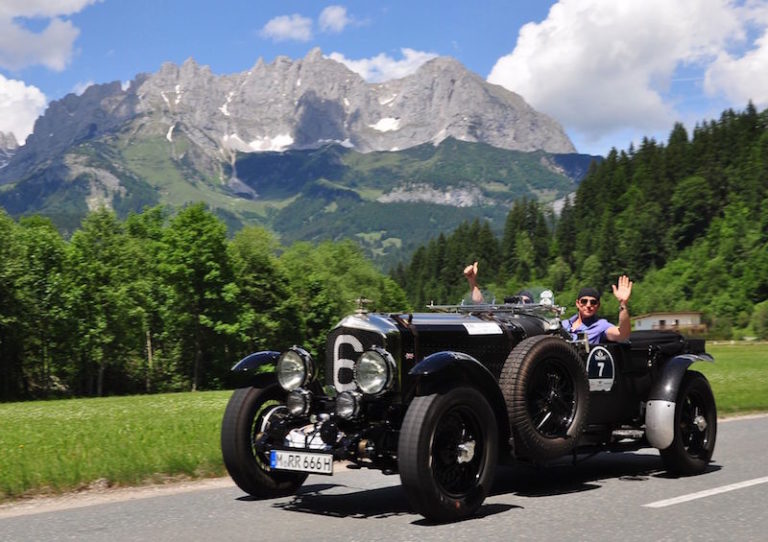 This is how anniversaries should be celebrated! The 30th Kitzbüheler Alpenrallye was a festival for friends of classical automobiles. The annual event provided the participants with splendid summer weather, many thrilling drives – and the biggest high-point was the first-time crossing of the Großglockner high-Alpine highway right in the middle of the Hohe Tauern glacial realm.

THE HIGH-POINT: GROSSGLOCKNER.
The annual rally 2017 was again an impressive tour through six decades of automobile history. The biggest high-point of the three-day rally event was our first-ever crossing of the Großglockner high Alpine highway at the Königs-stage on Friday. But the other stages on Thursday (prologue around the Hohe Salve) and Saturday (Pinzgau circuit) provided the teams with many driving experiences, picturesque side-roads, thrilling trials and numerous new routes at the foot of the majestic mountains in the Tyrol, Salzburg and Carinthia.

THOUSANDS OF SPECTATORS
filled the Kitzbühel old town for the grand finale on Saturday afternoon as the “rolling automobile museum” and the 188 teams rolled toward the finish line of the 30th Kitzbüheler Alpenrallye accompanied by a well-deserved applause: Splendid pre-war classics, such as the oldest vehicle – a Bentley 3-liter Speed Model from 1923 – were marveled over, as also the elegant sports Coupés and limousines from the 1950s and 1960s, racy sports cars and rare, newer models.

TWO COMPETITION WINNERS.
The overall winner – the Sports Trophy – was won for the first time by Patrick Weber and Sonja Ackermann (BWM 3.0 Si, 1973) from Wiesbaden (D); the winner of the Classic Trophy went – again for the first time – to Andreas Eberhardt and Horst Eberhardt from Kronberg (D) in a 1966 Ford Mustang GT. The only domestic podium-finisher was the team of Gerald Unterberger and Thomas Siedler from Kufstein (A) in a BMW 2002 Turbo after a strong finish on Saturday, who secured second place in the Classic judging.

MOST BEAUTIFUL VEHICLES.
Victory in the judging for the most beautiful vehicles this year went to Georg and Erika Ebeling in their Audi 225 Front Cabriolet, built in 1937 (pre-war) and to Robert Engstler and Hans-Gerd Jauch for their spectacular cream-white Bentley R-Type Continental from 1954 (post-war vehicles).

PROMINENT STARTERS.
Famous persons are to be found every year at the Kitzbüheler Alpenrallye. This year we welcomed: The Austrian film legend Peter Weck, ex-formula-1 driver Jochen Mass, DTM pilot Mike Rockenfeller and ARD television anchorman Jan Hofer. Peter Weck had been involved in the Alpenrallye 19 years ago – and again at this year’s anniversary rally with co-driver Rudi Höfinger.