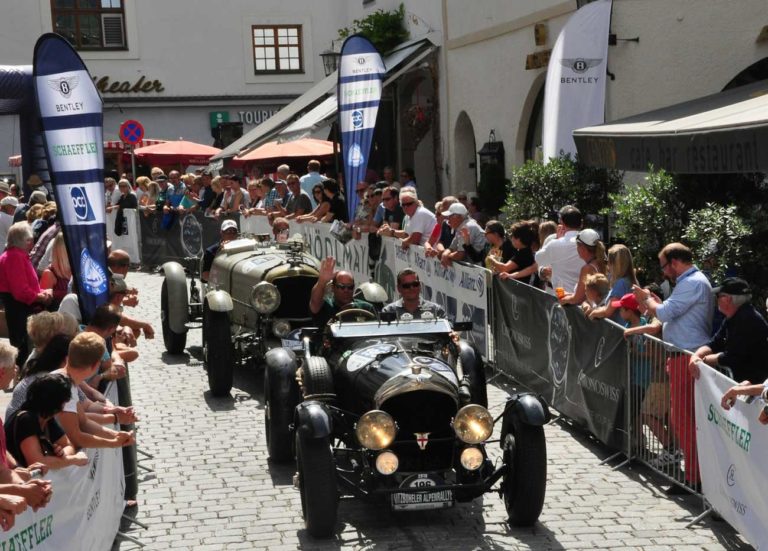 Thrilling Alpenrallye! The 31st Kitzbüheler Alpenrallye offered something for every enthusiast of vintage automobiles: Breathtaking motor vehicles, exciting competitors, grand routes, enthusiastic spectators – and even new victors in both competitions of the Rally.

Knuth Hennecke and copilot Patrick Weber from Neustadt (GE) in a Triumph TR4 (1966) won the Sport Trophy after running through three daily stages, 560 kilometers distance and more than 20 judging stations, and thus secured their first Overall Victory at the 31st Kitzbüheler Alpenrallye.

Victory in the Classic Trophy went to Kurt Steinhausen and Sonja Ackermann from Nürnbrecht (GE) in a Mercedes-Benz 350 SL (1958).

The judging prize for the most beautiful vehicle at the starting gate for prewar models went to Carl-Peter Forster (Munich, copilot Didi Forster) for his magnificent BMW 328, vintage 1939, and distinction for the most beautiful post-war auto went to Dr. Cornelia Stalker (Oberreichenbach, GE, copilot Robin Stalker) for her Mercedes-Benz 190 SL (1962).

In 2018 again many new routes were laid out along the most famous Alpine mountains in Tyrol and Salzburg: the Wilder Kaiser, Loferer Steinberge, Hochkönig, Hohe Tauern, Rofan and Kitzbüheler Alps offered impressive views of the Alpine mountains – a total of 560 challenging kilometers were in the Roadbook. One of the high points was the first visit of the Alpenrallye to Gasteinertal, with a circuit through the old Kaiser’s spa at Bad Gastein. A magical backdrop, created as if for time travel in classical automobiles. Numerous fabulous views of the Tyrolian early summer landscape and the impressive mountains greeted participants in the final Saturday course through the Tyrol back-country with an excursion into the romantic Brandenbergtal and the Kaiserwinkl.

The grand finale was an entry to the finish line in downtown Kitzbühel with a grand parade of vehicles, where thousands of spectators were gripped with vintage-automobile fever and rewarded the 169 teams at the end of the Rallye 2018 with a well-earned applause.

The starting field was highly diversified: From breath-taking pre-war classics, such as the oldest vehicle, a Bentley 3-Litre Speed Model from 1923, to elegant Sports Coupés and limousines from the 1950s and 1960s, racy sports cars and more recent rarities – the Rallye was an impressive cross-section of automobile history from six different decades. Bentley alone was represented by no fewer than 20 fabulous pre-war classics at the starting gate. The percentage of pre-war vehicles was particularly large this year: 29 open racecars from the 1920s and 1930s gained enthusiastic applause from the public – the roughly 560 kilometers across the sometimes very demanding Alpine roads were a particular challenge for them.

Motor sports is a uniting factor even at a Classic-Car-Rally: this year a particularly large number of former race drivers were infected by the Alpenrallye virus: formula-1 legend Jochen Mass, the former Le-Mans drivers Fritz Müller, Heinz Kuhn-Weiss and Georg Memminger and even ex-ski master, photo-artist and musician Hubertus von Hohenlohe were at the start of the 31st Alpenrallye. And a former World Rally championship winner, Armin Schwarz, served as Rallye Manager in Kitzbühel.